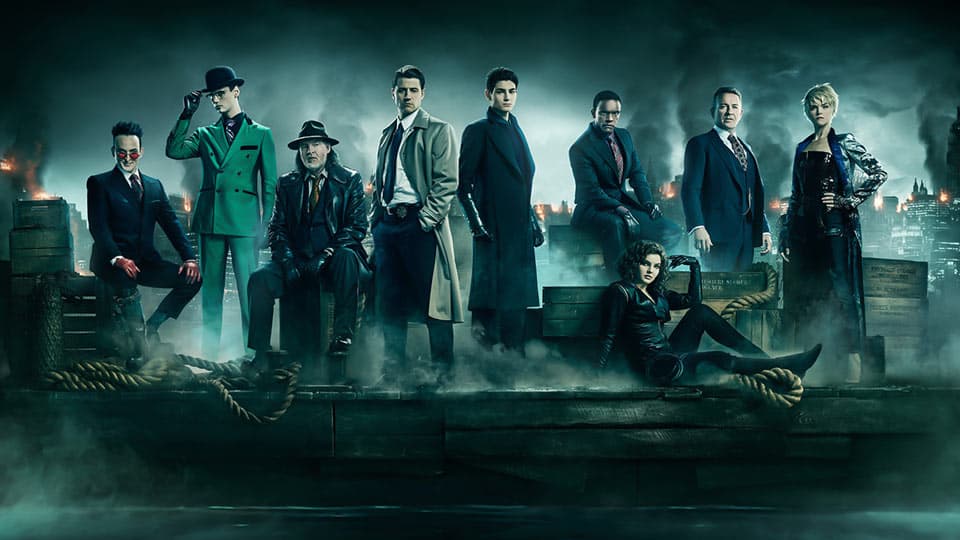 Discover the episode guide, facts and series transcripts and scripts.

Here's what we have on DC's, "Gotham". And, you can also read and download the transcripts, here, at 8FLiX.

GOTHAM is an origin story of the great DC Comics Super-Villains and vigilantes, revealing an entirely new chapter that has never been told. GOTHAM follows the rise of Det. James Gordon through a dangerously corrupt city teetering between good and evil, and chronicles the birth of one of the most popular super heroes of our time.DCEU

The show is no longer in production. But, you can still watch the entire 100-episode series. Here's how.

~ Originally broadcast on Fox in the US and Canada. Gotham's first episode aired September 22, 2014. The series finale aired April 25, 2019 to an audience of about 2.1 million, roughly half of the series premiere viewership.

~ There is a spinoff series called "Pennyworth," focusing on the origin story of the Waynes' closest confidant and "butler," Alfred. "Pennyworth" is entering its third-season and has limited release. "Pennyworth" is produced by DC Comic and Warner Bros. for US cable network Epix.

~ There are NO plans to revive the original Gotham series. If we hear of confirmed plans (not rumors), we'll let you know!

Meet the cast and writers of "Gotham". Also, get the poster while you surf over to the official website and discover other sources. CLICK or TAP the SUPPLEMENTS button for more.

And, for the "Gotham" scripts, transcripts, episode guide and more, keep scrolling! 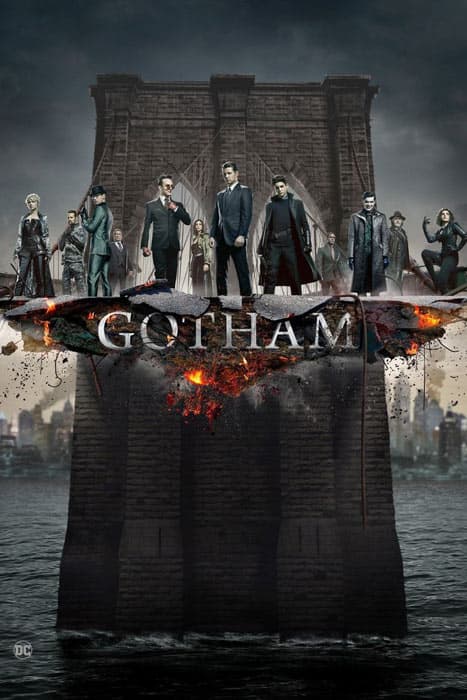 Here's our stash of "Gotham" scripts, transcripts and other swag.

Have a look at our "Gotham" scripts and transcripts from each season. You can go ahead and CLICK or TAP the button to go directly to the transcripts page.

For the TELEPLAY version, look for the appropriately labelled button.

Detective Gordon tangles with unsavory crooks and supervillains in Gotham City and forms a friendship with newly orphaned Bruce Wayne.

Season 2 | Rise of the Villains

Gordon gets into some murky moral waters when he starts cutting deals with unsavory characters. Meanwhile, a perfect storm of evil begins to stir.

Gordon's got his hands full when Hugo Strange's mutants escape his lab for the streets of Gotham and take over the city in a massive crime wave.

As Gotham's most fiendish criminals step out of the shadows to rebuild, Gordon and Bullock attempt to control the chaos -- with some help from Bruce.

Season 5 | Legend of the Dark Knight

Witness the end of Gotham in the show's final season as heroes and villains fight for their survival -- and Bruce Wayne comes ever closer to his destiny.